I’m not sure if this recipe is something really traditionally Chinese, or whether it is just something that my mum made-up for us.  I Googled it… and the recipes that came up were not quite the same.  Again, I figure it is Chinese, because I make it, and I’M Chinese.  Ha ha.  [Not sure if the same rule applies if I cook a (Chinese) steak or a (Chinese) meat pie ;D – ha ha ha ha ha!! ]

When I was a kid, I HATED green beans.  I don’t know why, but I remember the taste of them made me gag (I must admit, that I still don’t love them but will eat them if they are covered in gravy or a buttery sauce). I did however LOVE this dish, and somehow when cooked this way could eat them with no problems!

My mum used to make this recipe just in a normal rice cooker.  I suppose it is a bit like a risotto… except she used to make it with just normal long-grain or jasmine rice, not arborio (risotto) rice.  I make mine in my pressure cooker and I literally set it for 11 minutes (that’s an auto preset on the cooker itself… I’m not that OCD – ha ha!) and walk away. No need to stir!

There are a couple of differences to this recipe as opposed to my mum’s.  The main one is that she used to use dried, smoked oysters.  When mum was still around, I used to get my dried smoked oysters for this recipe from her, and now she’s gone I have no idea where to buy them!  I assume that you would be able to get them from a good Chinese grocery store but to be fair – I haven’t really looked that hard.  I just get canned, smoked oysters in oil/spring water from the supermarket now and use those.

More recently I tried substituting one cup of stock, with a can of coconut milk.  It was a really nice variation and just added another layer of flavour to the dish as well as a creaminess that it lacked when I just used stock.  I’ll be doing that again.

Definitely one of my favourite dishes.  You can make it your own… add lup cheong (Chinese sausage) or other veggies if you like.  This is just the way I make it, and pretty close to the way my mum made it for me.

I hope you give it a go and love it.

Till Monday, eat up! 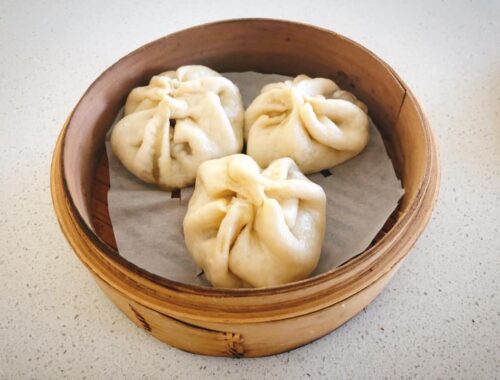