Hi everyone, it’s Dr Nick again, back to discuss some more common childhood issues that involve the gastrointestinal tract.  Today we will attempt to wade into the extremely challenging world of food allergy.  There is a huge amount of information to cover, so we will split this discussion over a few posts.

Food allergies are very commonly encountered by Paediatricians, Allergists/Immunologists and Gastroenterologists, with food related issues causing a lot of distress for patients and families.   Adverse reactions to food can be broadly divided into those where the immune system is activated (food allergy), and those where it is not (food intolerances).  Health professionals often find it difficult to recognize the difference between true food allergy and food intolerances, which makes managing these conditions difficult and confusing.

With these posts, we will focus on those reactions that constitute food allergy.

What is food allergy?

Food allergy develops as a result of an adverse immune system response, occurring with exposure to a food, and remaining absent with avoidance of the food.    The immune system’s response to the food can be varied and complicated, giving rise to many different signs and symptoms, in a number of different organ systems.

Overall, the immune response can be split up into those that are ‘IgE-mediated’, ‘non IgE-mediated’ or a mixture of both.  IgE is one of the components of our immune system (an antibody) that gets switched on in a number of different scenarios.  When it is switched on in allergic diseases, it leads to a few different characteristic clinical patterns, which we will discuss today.

These IgE-mediated reactions occur when a food allergen triggers the development of specific IgE antibodies, which then, on exposure to that food, activate immune responses that cause the typical allergic signs and symptoms.

How common is food allergy?

The prevalence of true food allergy is very difficult to measure.  What is clear is that food allergy is more common in children than adults, and seems to be increasing in many countries.

In addition, household perceptions of having adverse reactions to food, be it allergy or intolerance, are common throughout the world. In a United Kingdom household survey, 20% of the population reported food intolerances. However, when controlled food challenges were performed, the number of true reactions to food was less than 2%.

The prevalence of food allergy across the whole US population is approximately 2.5–3% when objective measures, such as serological testing and food challenges are used.

Our gastrointestinal tract is continually interacting with new and foreign substances, including foods and bacteria (both good and bad).  Given this the intestinal immune system has a difficult job to do, trying to protect us from toxic substances and nasty bacteria, and trying not respond excessively to foods and the good bugs.    The gut tries to minimize the amount of dietary proteins that the immune system can recognize and react to, but there is still a significant amount absorbed by those of us following a typical ‘western’ diet.

The interaction of these dietary proteins with the intestinal immune system, particularly in early life, is key in determining what kind of responses the immune system will have in the future.

IgE-mediated food allergy results when an immune response usually aimed at targeting parasites is instead mounted against food proteins.

In IgE-mediated allergy, exposure to a trigger food brings about immediate and consistently reproducible effects on the gut, skin or respiratory system. Any protein can theoretically cause this kind of response, but the vast majority of these reactions occur to the same common allergens. In children, cow’s milk, egg, peanut, soy, tree nuts, fish, shellfish and wheat account for 85% of all food allergies.

However, many of the allergies that occur early in life tend to disappear over time, leading to a different group of common allergies in adults.  The most common allergens in adults are peanuts, tree nuts and seafood.

Symptoms of food allergy usually start within a few minutes of exposure to the trigger food and must occur within 2 hours to classify as an IgE-mediated response.  Any combination of the symptoms seen in the table can occur.

The most severe reactions lead to potentially fatal anaphylaxis. Skin effects are the most common, found in 80% of cases.

Oral allergy syndrome – a localized food allergy triggered by certain fruit and vegetables, as well common pollens.  It is more common in adults than children. Exposure to trigger foods causes an immediate contact- related rash, with associated itching and tingling of the lips, tongue and throat. Occasionally there are more severe features, but anaphylaxis is uncommon (2%).  Common triggers are melon, banana, apple, kiwi, tomato and celery, usually just in raw form.

Anaphylaxis – a systemic response where a massive release of inflammatory proteins causes a severe and potentially fatal reaction.  Food anaphylaxis can occur after eating the food, but also with skin contact or inhalation.  Gastrointestinal features are more common, occurring in 41% of cases.  The most severe anaphylactic reactions occur with peanuts.

Food dependent exercise-induced anaphylaxis – an uncommon disorder where allergic symptoms occur during or after exercise, associated with food ingestion prior.  Symptoms can range from mild skin changes to anaphylaxis.  Symptoms typically occur around 2 hours after food ingestion and subsequent exercise.   Shellfish and wheat are the most commonly implicated foods.

A detailed history is extremely important when trying to establish a diagnosis of IgE-mediated food allergy, so that testing can be focused and sensible, avoiding false positive results.  The history should include previous reactions to foods (cooked vs uncooked), as well as both a personal and family history of asthma, eczema or hayfever, and a family history of food allergies.

Testing for IgE-mediated food allergy should be performed in a specialist allergy clinic, as results can sometimes be difficult to interpret, and require specialized training to read correctly.

Skin prick testing (SPT) is the most commonly administered test for IgE-mediated allergy, involving food extracts applied to the skin before being pricked by a needle, watching for a skin reaction.

The challenge with SPT is to distinguish being ‘sensitized’ to an allergen (meaning that the body makes IgE without other symptoms), and being actually allergic (with corresponding symptoms of allergy).  A detailed history of reactions is important in this regard, where correlating SPT results with symptoms can identify the truly allergic reactions.

Another method of using the skin for testing is with skin patch testing.  This test is not designed for use in the diagnosis of IgE-mediated allergy for the most part, and has more of a potential role in non IgE reactions.  Regardless, the utility of this test should be discussed with your allergy specialist.

The interpretation of blood testing for food allergy has been challenging for clinicians, as most commonly available tests yield MANY false positive and false negative results.  More recently there have been improvements in the available testing using specific IgE antibody tests, but you should always discuss the possibility of blood testing and interpretation with your allergy specialist.

Food challenges are the ‘gold standard’ for diagnosing food allergy, but are expensive, labour intensive and have a risk of severe reaction.  As such, these tests should always be performed by an allergist/immunologist under controlled, monitored conditions, usually in hospital.

Managing IgE-mediated food allergy involves a two-pronged approach of avoidance and preparation for accidental exposure.  When discussing this with your physician, there is a vast amount of information to go through, usually beyond the scope of a typical outpatient appointment.  Ideally, there is a multidisciplinary team as well as written information and emergency action plans available.

Management of an exposure is beyond the scope of this blog, but please make sure you are well prepared for this with a written emergency plan detailing how to manage reactions, access to an Epi-Pen and training in its use, and knowledge around contact with emergency services and your physician.

With regard to avoidance, it is important to discuss the likelihood of cross-sensitization (closely related foods that could also cause a reaction).  One study determined the likelihood of cross-reactivity as described below in the table, but avoidance of these should be discussed with your specialist.  In addition, it is important to discuss your allergies with a dietitian, to ensure avoidance doesn’t impact a balanced diet.

Although current food allergy management relies on adherence to a strict elimination diet and prompt response to any accidental exposure, there are some promising leads towards new therapies.

Immunotherapy uses graded exposure to an allergen to promote tolerance to it.  Most studies have assessed oral immunotherapy, but the use of the sublingual route is also under investigation. Immunotherapy can only tackle single allergies at a time.

As multiple food allergies are relatively common, a broader suppression of reactions has been attempted using medicines that target IgE, with potential roles in treating food allergy currently under investigation.

Re-introducing foods into the diet.

Most children with allergy to egg and milk will eventually be able to tolerate it. This is also likely with soy, wheat, and many fruits, vegetables and seeds, though these are less well studied.  This tolerance often develops in a step-wise fashion, with cooked forms tolerated before the raw equivalents. It has been found that up to 70% of children with severe reactions to egg or milk protein can tolerate normal serving sizes of the cooked protein.

There are benefits of allowing cooked products into the diet as soon as they are tolerated. These include improved quality of life, easier attainment of adequate nutrition and the potential to accelerate the development of tolerance.

Next time, we will discuss non IgE-mediated food allergy, including those with predominant gastrointestinal symptoms including food protein induced enterocolitis (FPIES).  Until then…

Dr Carman was born in Atherton in Queensland, and grew up in Brisbane, completing medical school at the University of Queensland. He completed his Paediatric Gastroenterology fellowship at the Royal Children’s Hospital in Brisbane, Australia, and subsequently moved to Canada to undertake an advanced clinical research fellowship in Inflammatory Bowel Disease at the Hospital for Sick Children in Toronto.

He recently joined the Division of Paediatric Gastroenterology, Hepatology and Nutrition at the Children’s Hospital of Eastern Ontario in Ottawa where he is Director of Advanced Endoscopic Diagnostics and Therapeutics. He became an Assistant Professor of Paediatrics at the University of Ottawa in 2017. Dr. Carman’s research interests involve clinical outcomes in patients with Inflammatory Bowel Disease.

He also has a special interest in advanced endoscopic techniques in the management of paediatric patients with gastrointestinal disease. He lives with his wife and daughter in Ottawa. 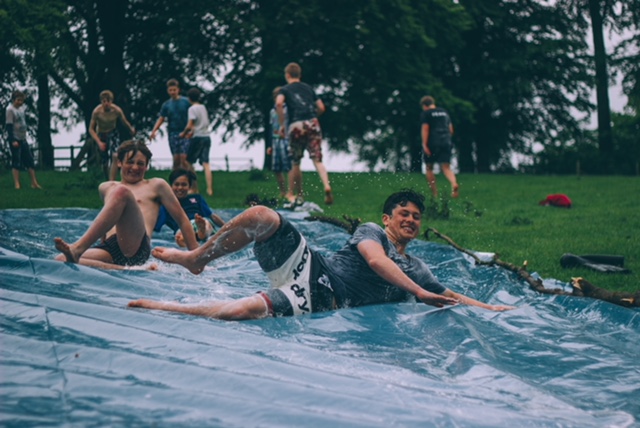 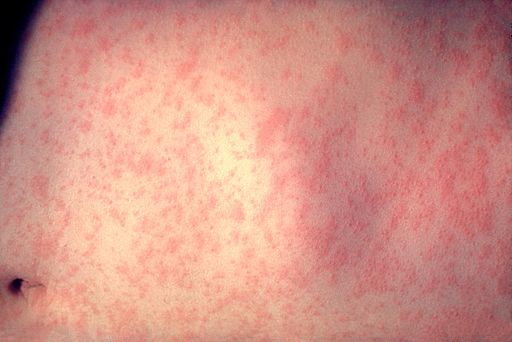 The Return of the Measles